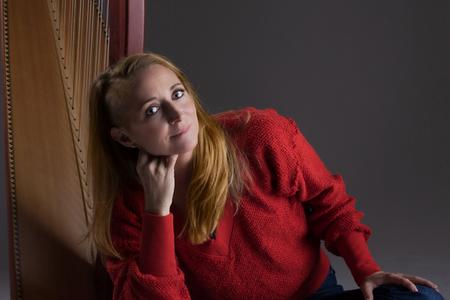 Featuring harpists from Ector County Independent School District in Odessa, Texas in their own original composition for harp ensemble.

When I was little, before I started taking music lessons, I would set up all of my stuffed animals in front of a little chalkboard and teach them how to read. My mom said I was destined to become a teacher. And then I discovered the joy of making music. Years later, it was a done deal: I want to not only play music, but I have it planted in me to also teach it. To spend a day surrounded by harps and people discovering music together is a day well spent.

My approach to teaching is unconventional rather un-academic. It’s a mix of my musical upbringing, the Suzuki Method, and the goals and tastes of each student... all with the intention of stimulating creative and authentic expression.

an amazing musical experience, be it an audience of 1 or 100.

​Her playing is inspired by the unique sound of the instrument-

its resonance, its possibilities, and its sacred voice. Megan

collaborates regularly with musicians and artistic groups on

Harp Column Magazine, with the published arrangements to

follow in 2016. Not a stranger to composition herself, Megan collaborated with vocalist/percussionist Rebekah West to create and record original music from a tiny chapel where she lives in Cabris, France, resulting in the 2015 album Les Audides (the Echoes). Her composition Mon Souffle for harp and cello was premiered at the American Harp Society national conference in 2022.

Megan currently teaches in her private studio as well as the Conservatoire de Musique in Cannes. She regularly shares her improvisation workshop "Green Harp" throughout Europe and the USA.

Megan holds a BM in harp from the University of Arizona

with jazz harpist Carrol McLaughlin and a MM from the

University of Texas at Austin under Delaine Fedson. She

gained a Premiere Prix from the music conservatory in

Grasse, France under the tutelage of Alessandra Magrini

and Elisabeth Fontan-Binoche. She cherishes the memories